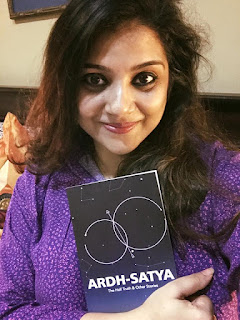 In the beginning, there were only a few words, then sentences. Then songs happened; then poetry. What remained of me became my story.
Ardh- Satya & Other Stories is now in all major bookstores in India and available on Amazon. Order your copy now.
http://www.amazon.in/ARDH-SATYA-Truth-other-s…/…/ref=sr_1_1…
Much love and sunshine,
Ananya
Posted by Annie's Desk at 7:12 PM No comments:

Feels a bit awkward to shout out for attention but am told, if I don't, I would be just foolish in an old fashioned way. So please spend a minute when you have one to stop by my author page and maybe the thumb therapy could work some wonders! Thank you so much for your "likes"! And if you share the link, I would, of course be very grateful.
Humbled again.
https://www.facebook.com/Ananya-Mukherjee-1781727048731332/…
Posted by Annie's Desk at 11:47 PM No comments:

By Ananya Mukherjee
It is that time of the year again, when the quintessential “Lyadh khawa Bongo shontaan” wakes up from his cultural hibernation, shuns his acquired tastes and part-British, part-Medinipore accents, ransacks the Chaitra Masher sale to become the dhakka paad dhuti clad Babumoshais and Jamdani mora Bouthhans straight from the pages of a Sarat Chandra Chattopadhyaye novel, and gets all set for the “kobji dubiye bhuribhojon.”
“Arre moshai, kalboishakhi, poila boishakh, Rabindra Jayanti, bajare natun aam, jamai shoshti….eshob chere ki aar global citizen howa jaye!!" Ekhon bangali nohii toh kabhi nahi.
In times when the insane waves of consumerism had not hit and swept the moddhyo bittyo Bangali off their feet, this was the only other time of the year apart from Pujo, when boudis, mamonis and didibhais would be clogging the pavements of Gariahat and Rashbehari Avenue, in scorching late morning or afternoon sun and striking the best deals at Bounir shomoy. The trick was to quote exactly half the price or less and then walk away and yet keep your ears alert for that one welcome back call…. “Ei je didibhai, aare shunoon, aapni koto deben boloon, phinaaal etai laasht”!
Of course, the “ei ja pocha goromtai poreche moshai” would have little or no impact or influence on the "saat pod ranna" nor could the "buuk jala" and "chora ombol" discourage mashima and meshomoshai from taking another helping of the “jhurjhure aloo bhaja” or “tel koi”!! Poila boishakh bole kothaa!!
It is also that time of the year when each Bong household would be focussing less on mathematics and more on extra-curricular activities. Domestic performance workshops are a must in every bong home, especially when the paraar Rabindra Jayanti is around the corner. Make a request and see! You will have Mamoni singing “Kotobaar bhebechinu apona bhuliya” and Tumpa dancing to “Momo chiitte” at the drop of a hat, or at the hint of the word, Talent! Oh, that we have in plenty apart from the egoistical intellect. Sometimes, I wonder if the word "aant" and "aantel" are co-related!
Whether or not Babushona cracks the joint entrance, he will be able to tell you in detail where Ritwick Ghatak’s frame is different from Mrinal Sen’s, why Ronaldo is cooler than Maradona and what is the predicted result of the American Presidential Elections. Tell him to move his butt and fix the electric fuse, and he will smile and wait for Shankarda to do it while strumming his guitar, preferring to stay in the dark all evening. Babushona, am told, writes and composes his own songs. I think I hear a bit of Cohen, a lot of Dylan but am convinced the concoction is not all that bad.
It is also the time of the year when the jamai babajibon, no matter how crooked his records are, will try to get them straight. Let there be a few rain showers and he is ready to come dressed as the quintessential "bhalo chele" with jora illish to add value to his shoshurbari.
And then amidst all the pyech pyeche gorom there would come a day of Kalboishakhi and the dead poets societies in Bengal would awaken from slumber, step out of every defined boundary, unleash the soldier in their blood, dare and absorb the storm and be ready to take on the world. And when the rains hit you, you would have a soul cleansed by the richest of cultures and purest of hearts!
Do not be misled by the lull. Like the kalboishakhi, the Bong will break open every door and sweep you off your feet.
Yes, porojonme abaar Bangali hobo!
Shubho Nabo Borsho!
Posted by Annie's Desk at 6:47 PM No comments:

When I listen to your voice, all I can hear is the gurgling laughter waiting to spontaneously overflow and infect me.
When I see you in silence, what I read are the songs you have hidden in your eyes.
Your touch is almost lyrical, like the opening stanza of a couplet, rhythmic yet secretive.
In my passive consciousness, sometimes in unrehearsed moments of solitude and tranquility, I remember the fragrance of a perfume and know you are there.
And in that momentous juncture when all my senses surrender and am holding my muted soul in silence, you reach out to me.
And that's where we begin to connect.
Happy Listening
https://www.youtube.com/watch?v=_Xtcx8ivN_w&feature=youtu.be
Posted by Annie's Desk at 12:36 AM No comments: